by Frances Dodds
in Growth Hacking 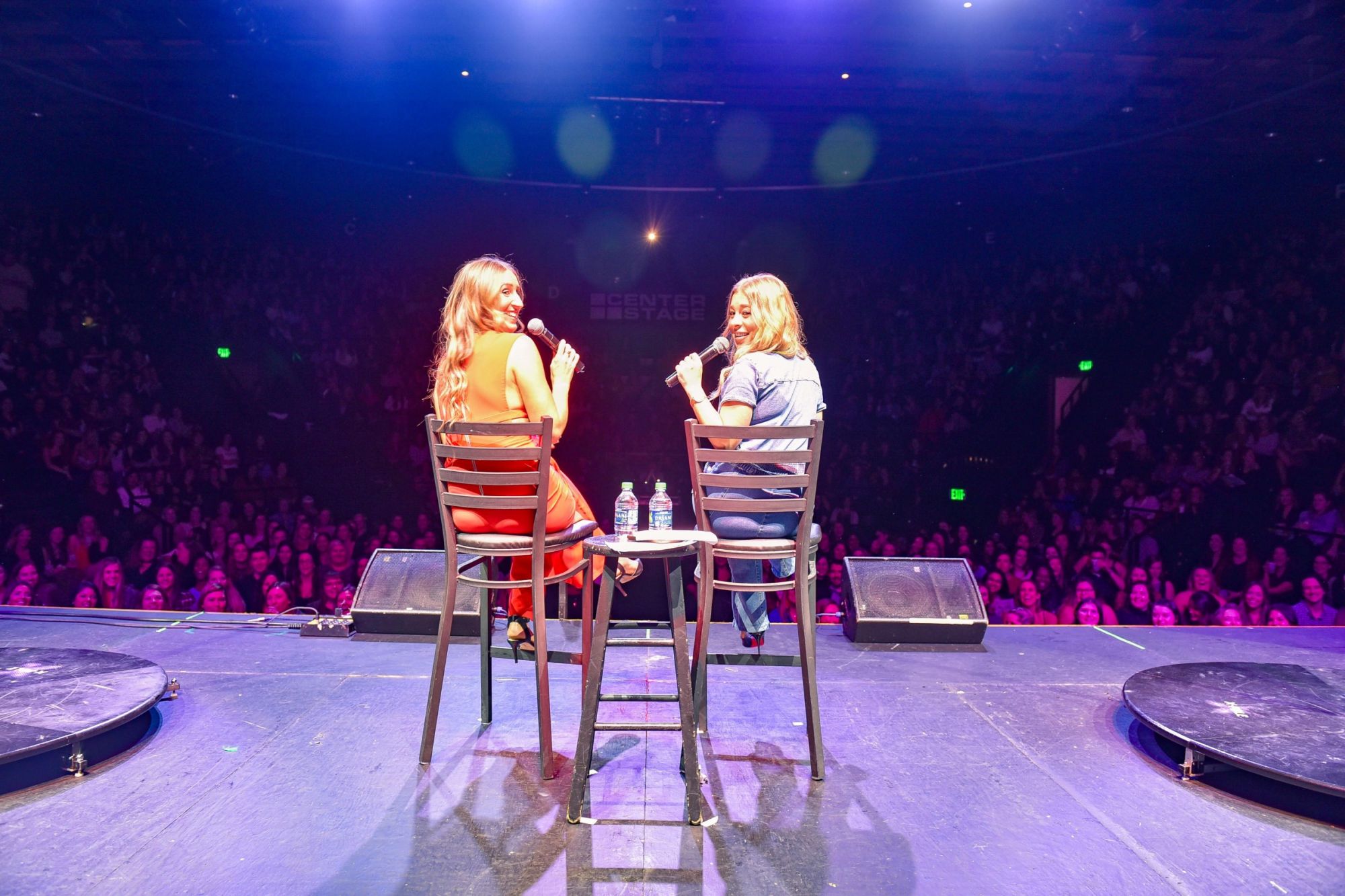 With 2.5 million weekly downloads, their podcast is a booming business.

Trauma may sound like a strange starting place for comedy, but then, Lenny Bruce once said, “All my humor is based on destruction and despair.” The ladies behind the sex, dating and relationships podcast Girls Gotta Eat are no strangers to this truth. When Ashley Hesseltine found herself in a relationship she desperately wanted to fix, but couldn’t, she did a deep dive into the psychology of relationships. That knowledge became the foundation for Girls Gotta Eat, which she started in 2018 with Rayna Greenburg, who’d experienced her own romantic trauma when her fiancé left her. Now, the podcast gets 2.5 million downloads a week, is a top 20 podcast on iTunes and Spotify, and after 50 live shows last year, Girls Gotta Eat is going on tour in Australia.

It’s easy to write off entertainment successes as tales of pure talent, but Hesseltine is not starry-eyed about that: “We treated the podcast like a business from day one,” she says. Being an entrepreneur has always been a goal for her, given that, “I’ve had quote-un-quote ‘problems with authority’ my whole life.” Greenberg agrees that the greatest gift of building their brand from scratch has been the independence that comes with it.  “I’m in control of my own life and all the success and failure is my own.”

Hesseltine’s background is in TV, radio and stand-up comedy. She began freelance writing in 2010 and ran a blog before starting the viral Instagram account @BrosBeingBasic, which now has 959K followers. Greenberg started out in the restaurant industry, and eventually moved into startups before going to work at Amazon. Meanwhile, she started her hit food blog One Hungry Jew, and when she passed 200,000 followers, she quit her job. Now, her personal Instagram account, @Rayna.Greenberg has 383K followers. The ladies met on a press trip, and after becoming friends, decided to start the podcast. Fans come for self-help swathed in jokes about dating app mishaps and hot doormen. Greenberg and Hesseltine riff on their lives and respond to funny listener questions, and experts share their knowledge on a range of topics. Here, the ladies share their takeaways from building a podcast into a brand and a business.

1. Leverage past accomplishments, and always look for the next move.

“I have felt in my career like you have to constantly pivot and evolve, and use what you’ve already built to enhance your next endeavor,” Ashley says. “So for me, my blog basically turned into the Instagram account, which I was then able to take the followers and promote the podcast on day one. Starting out, Rayna and I had these Instagram accounts with collectively a million followers.”

2. Keep your material fresh and dynamic.

3. Take the time to create a structured, quality product.

“Anyone is welcome to plug a mike into their laptop and start recording and throw it up on iTunes or Soundcloud or wherever,” Ashley says. “That is some people’s path, but that was not ours. We researched the mics and soundboards extensively. I learned the editing software. And we wanted to have structure. We didn’t just want to shoot the shit. We take a lot of time with the flow of the podcast, to make it sound tight. I cut dead air, and big chunks we don’t think are relevant. We really attribute a lot of our success to that.”

4. Ask your audience to share the podcast, on social media and in person.

“We ask listeners to go on social media and tag the podcast or tell people about it,” Rayna says. “It sounds like a small thing, but we asked people recently, ‘How did you find the podcast?’ And most people will say, ‘my coworker, my boss, a friend of a friend, my sister,’ things like that. So we ask people to share, and really utilize social media as a tool to grow the show.”

5. Instead of going after high profile guests, be a guest on other podcasts.

“We learned early on that we gained new followers from guesting on other podcasts as opposed to having guests on ours and hoping they’ll bring their following over, “Ashley says. “That’s worked too, but when we ask people how they heard of the podcast there’s definitely more of, ‘I heard you on Barstool or Kaitlyn Bristowe’s podcast,’ than I found you because someone I follow was a guest on your podcast.”

6. Set up your podcast like a business, but don’t jump at the first chance to make money.

“We didn’t think day one we were going to start making money, but we did treat it like a business,” Ashley says. “Before the podcast even launched, the website and Instagram were set up and we had a photo shoot with promo photos.” Still, The ladies didn’t do any ads for the first six months, and then only one here or there for the six months after that. “We took a lot of time to take every phone call and really figure out what was out there before making a decision,” Rayna says. “We didn’t jump at the first person and I think that’s really important.”  Eventually they signed with an ad network that takes a cut of profits, but handles everything. “We know sales but podcasting is different and we wanted someone to manage it completely,” Ashley says. “We have a very detailed spreadsheet. We have someone send us the copy points, it’s all organized for us and that’s what we like.”

7. When touring live, don’t get fancy. The audience is there to see you.

“For the first few live shows we had openers and we were traveling with comedians, and we had guests in every city,” Rayna says. “But it costs a lot of money to fly someone out for a ten minute set. You pay for their hotels and flights.” Finding local talent was tough, too, because it was hard to predict if their audience would find a comedian funny, or a guest speaker engaging. Eventually they realized it was all a lot of trouble and expense when people were there to see them. “Basically I would say the audience is the guest now,” Rayna says. “We do a ton of audience participation. We read their emails, and we’re usually in cities for a little bit of time before a show so we do a lot of material about the city.”

8. If your content is based on your personal life, your life will change. But maybe not in the ways you’d expect.

What is it like to date when you talk to millions of people every week about your dating life? “There are always going to be people who don’t want to date you because you have a public platform and that’s certainly something I’ve faced,” Rayna says. “That’s a hard pill to swallow when you really care about somebody. But that person’s just not going to be my person.” Ashley says it’s tricky on the flip side too, when someone seems interested in part because of your platform. “Sometimes guys recognize me on dating apps and I don’t really know how to handle it. I feel like we would set out on unequal ground if I went out with somebody who knew every single thing about my dating life and I knew nothing about them. It’s a turn-off, it just is. So typically when a guy opens with knowing who I am, I do not entertain it.”

But both women say the podcast’s real boon to their personal lives has been in their non-romantic relationships. “It’s allowed me to travel to new places, and reconnect with people I probably wouldn’t have seen,” Rayna says. “And a lot of our friends and family listen to the show, so they’re able to keep up with us.”

For Ashley, the best relationship she has now is the one with herself. “Overall my relationship status has changed in that I care less about having a relationship. When we started the podcast we ‘joked’ that I wanted to get engaged that year, and I really felt like I did. But over time I feel like I’ve been able to achieve this life that I always wanted. We’re making a difference—I know that sounds cheesy—but these are the listener’s words, not ours. We get to make people laugh, and enhance their lives, and perform. And make money while doing it!”