by Drew McLellan
in Growth Hacking 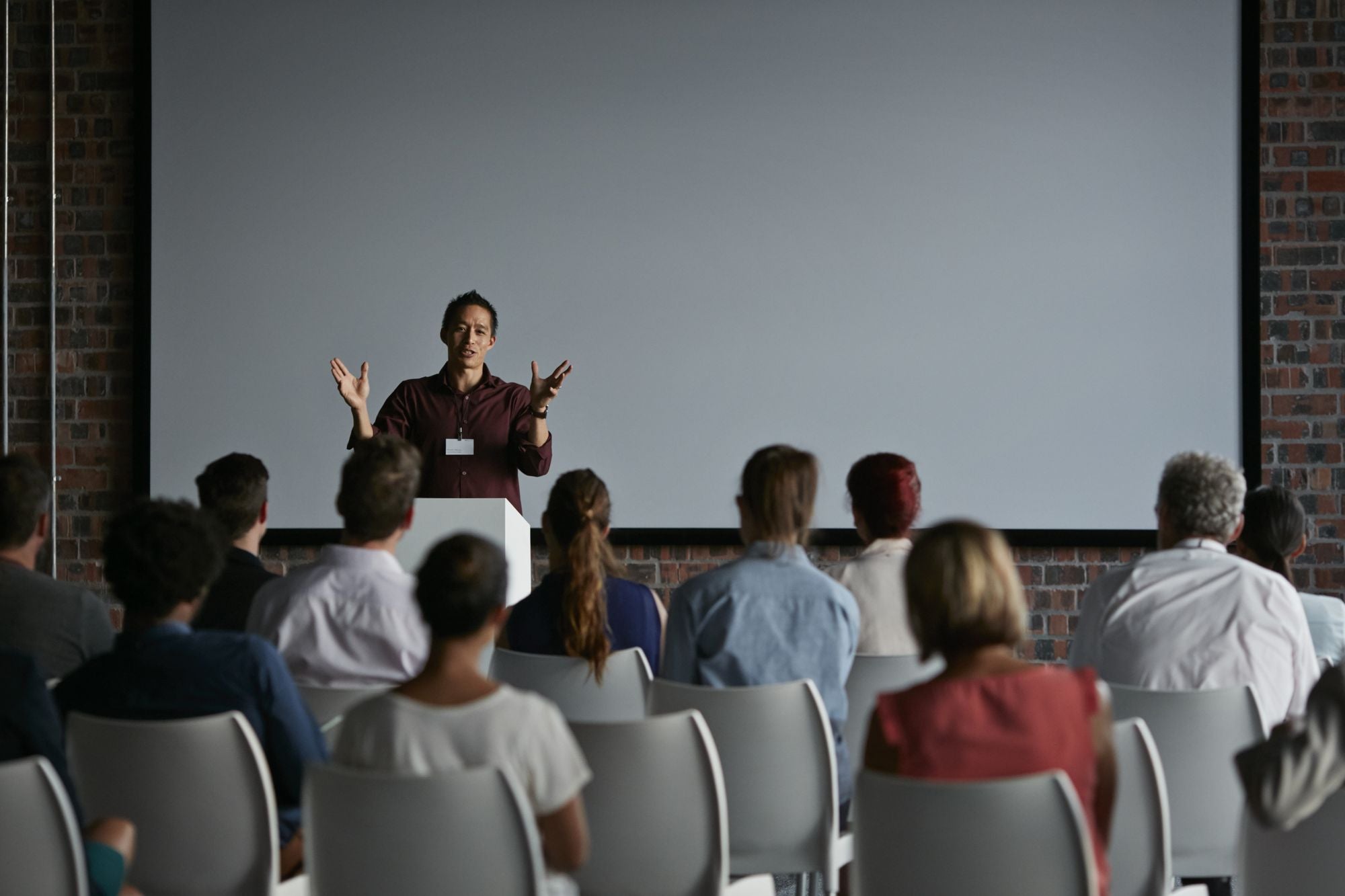 When mapping out your entrepreneurial dreams, don’t forget to hone your public-speaking skills.

Public speaking is something many people fear — even visionary CEOs. Worse, they fail (and fail hard) at it. Tesla’s Elon Musk, for example, has publicly chastised himself for his lackluster performances, most notably a 2011 SpaceX press conference during which he blunders and stutters his way through. It’s painful to watch.

Even if you’re not Musk-level famous, public speaking is an essential skill. Whether you give a talk at a conference, lead an all-hands meeting or, yes, even talk with an employee or client one-on-one, each encounter is an opportunity to develop your business. It could be argued that every time you speak, you’re doing so to influence opinion, inspire action or stir up a certain feeling. You’d better know how to present like a pro.

The Power of Public Speaking

If you’re a business owner, speaking might arguably be one of the most powerful tools in your arsenal. I realized this recently when I interviewed Michael Port, author of eight best-selling books, including Book Yourself Solid and Steal the Show. He reminded me that great speeches have changed the world many times over. Consider Martin Luther King Jr.’s “I Have a Dream” speech and the civil rights movement. Odds are you aren’t trying to affect that level of change, but you can have an impact.

If you don’t feel you have a natural gift for public speaking, you might use that as an excuse not to keep working at it. But what most successful speakers like Port will tell you is that natural talent only takes you so far. The key here? Practice, practice and more practice. Many of the best speakers have worked hard at mastering the skill. They approach public speaking as a craft that can be honed through dedicated persistence.

Though you’ll probably never reach MLK levels, you can still work to improve your public speaking so it becomes a business asset and not a liability. Use the following tactics to improve your skills, whether you’re giving a big presentation, pitching to a potential client or even having one-on-one conversations with your employees.

Why are you speaking, and why is your audience there to listen? Are you trying to educate them, persuade them to take action or simply connect with them? If you know your goal, you can choose engagement tactics to help achieve it. For example, when I speak at Content Marketing World every year, I’m there to reveal the results of a new research project, and I’m particularly clear about my goal: I want to educate and inform my audience members while demonstrating my expertise and commitment to their specific industry.

Steve Jobs doggedly practiced his speeches; he thought through every single word and gesture. And his work paid off — he’s one of the most legendary speakers of the modern era. Even rival Bill Gates described Jobs as casting spells on his audience, and his the late Apple co-founder’s addresses have their own Wikipedia page.

If you rehearse a lot, you’ll feel more comfortable and more likely to achieve your objective, but dedicating large blocks of time to practicing every speaking opportunity is neither feasible nor wise. Here’s a good rule of thumb: If an opportunity is low-stakes, spend less time on it. If it’s high-stakes, carve out the time on your calendar to practice until you get it right. Just like the military wouldn’t wing a high-stakes mission, you shouldn’t walk into a room with 1,000 people (and lots of business opportunities) just to “see how it goes.”

Truly great speeches live in the intersection of education and theater. What theatrical elements can you inject into your presentation to make it memorable? For example, even if you practice until you can give the speech in your sleep, still leave room for improvisation on stage. Your presentation will sound more natural.

One of the best theatrical elements I’ve ever seen happened when a speaker explained how much crude oil it takes to produce one Big Mac. Rather than throw out a statistic, he literally showed us. On stage, he presented a Big Mac and four drinking glasses, and he filled up three and a half glasses with oil. I’ve had the illustration burned into my mind ever since.

Related: 10 Tips to Beat Your Fear of Public Speaking

4. Don’t let a slide deck do all the talking

Nobody has ever been truly inspired by a slide deck. Instead, your presentation should rely on your words, i.e. the story you’re telling. But if your presentation must include slides, prepare them after writing your speech. You might find that visual elements won’t improve your presentation after all. Plus, using a slide deck as a crutch could be a colossal mistake. Technology can fail. Jeff Bezos actually banned PowerPoint in Amazon’s executive meetings, and he called it an ineffective tool that enables disjointed ideas. Now, Amazon’s executives deliver pitches in short memos called “narratives.”

Some people have a natural talent for public speaking. But for the rest of us, it takes practice and smart tactics to become effective and memorable speakers. If you take the time to hone your skills, speaking could become your greatest business-development tool.